Are you in search of the best controller for League of Legends: Wild Rift? In this article, we explain in detail which are currently the best performing controllers for this game.

League of Legends: Wild Rift is Riot’s mobile version of the well know game usually abbreviated as LoL. Obviously, they are not able to just translate the mechanics of the game straight onto a mobile platform. For that reason, Riot has made some basic changes for the game’s mechanics to be more fitting.

One of the most notable changes introduced is an adaption of some characters’ abilities to better accommodate the switch in the platform. The sentinels on Wild Rift do not have turrets around them but actually, defend themself.

This was mainly introduced to bring down the game’s timing to less than 20 minutes, as playing a game on a mobile device might not be as comfortable as playing on the PC.

The game can currently be played on Android, iOS. The cross-play between the Mobile version and the PC version will not be allowed, as this would be unfair due to several advantages the PC gamers would have.

So in that regard, Wild Rift is a separate game with its own unique features. While the game’s mechanics might differ, the lore and in-game events will all be aligned.

What Wild Rift does allow, is cross-play & cross-saves between mobile and console versions of the game, like Switch, PS4, and Xbox One.

DID YOU KNOW: If you are used to playing League of Legends PC, then it might come to you as a surprise, that in LoL: Wild Rift some price tags of items are different. Not only that but some Items are also assembled from different components.

One other notable difference compared to the PC version is, that the pace of the game is much faster. For example, some monsters spawn much faster than you might be used to.

Another thing worth mentioning is that the field of the game’s view differs depending on the size of your phone’s screen. This means if you have a phone with a bigger screen you might have an edge over your opponent with a smaller screen ?.

Why to use controller for League of Legends: Wild Rift?

I can tell you from personal experience that playing this game with a controller instead of on-screen controls is a whole new world. If you haven’t tried it yet I am sure you will be amazed. There are several main advantages of using a controller:

I have prepared a graphic presentation of the best controllers for League of Legends: Wild Rift. Here, we evaluated the controllers based on several characteristics, such as comfort, button layout, battery life, and connectivity.

From that, we determined the overall quality of the controller. However, keep in mind that the final score does not take the price into the account. Therefore budget controllers might not perform as well as high-end devices.

Hope you find this chart helpful and something that will make your final decision much easier.

Which are the best controllers for League of Legends: Wild Rift?

GameSir X2 has a similar design as Razer Kishi and is definitely one of the best controllers for League of Legends: Wild Rift. The controller extends, the phone is connected to a USB-C port and it sits nicely in the middle.

I have to admit I prefer such design of the controller for three main reasons:

GameSir X2 supports most of the popular cloud gaming platforms like Microsoft's xCloud, Google's stadia, and Vortex, etc. You will be able to enjoy your favorite cloud games in a whole new way.

As I already mentioned the controller connects to a phone via a USB-C port. This is implemented in a convenient way that allows the connector on the controller to rotate up to a 51° angle. This helps with the easier plugging and unplugging of your device.

Direct connection through USB also eliminates any lag that could appear using a Bluetooth connection.

The controller is powered through a USB port from the phone. However, you don't need to worry as it consumes very little power. Chances are you won't even notice a difference if you have a controller connected or disconnected.

The soft rubber back provides an excellent and comfortable grip, even if your hands are sweating. 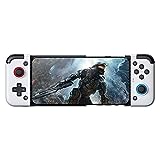 PowerA MOGA XP5-A Plus is truly one of the best controllers currently available that is also compatible with Android devices. With this controller, you will finally be able to replace annoying touchscreen controls and enhance your gaming experience.

MOGA XP5-A Plus is a wireless controller that connects with your device (phone, PC, or PlayStation) via Bluetooth. So no more of that annoying cables. Additionally, it also features an integrated Power Bank, so you can charge your phone while gaming.

The controller is beautifully and ergonomically designed for maximum comfort while gaming. It also features a standard button layout, so you won't have any problems adjusting to it. Thanks to well-placed rubber grips, you will have firm control, ensuring the best possible gaming experience.

In my opinion, this is certainly one of the best controllers for League of Legends: Wild Rift. So give it a go and see for yourself. 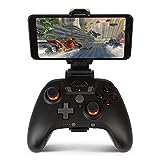 Razer Kishi is a well-designed controller for mobile gaming. It is fairly similar to Nintendo Switch, which might be helpful for some of you that are already familiar with this type of controller. It features a compact design, which makes the controller easily portable. It is suitable for iOS as well as Android, however, we need to pay attention to buy the right version.

Otherwise, Razer Kishi is an excellent piece of equipment that comfortably sits in the hand. It connects to the phone directly through USB-C port. This is a nice plus since the phone is charging while you're gaming.

The controller features a very intuitive button display so you will quickly get used to it. Among the controls, you will find two clickable analog sticks, four AXBY buttons, navigation buttons, D-pad, triggers, and shoulder buttons.

This is for sure one of the best controllers for League of Legends: Wild Rift. It is definitely worth trying it out. 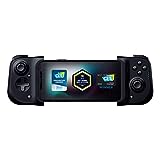 Rotor Riot is the only Apple-certified controller with clickable thumbsticks (L3 R3 functionality) currently available on the market. The controller is compatible with over 1000 games, including Call of Duty, Minecraft, Asphalt 9, and many more. Therefore, I would definitely list it as one of the best controllers for League of Legends: Wild Rift.

The controller uses a wire to connect to the phone. This can be a benefit since you are not running any risks of losing the connection in the middle of the game. Additionally, it also helps you avoid latency. So there won't experience any lag as you often do when using a Bluetooth connection.

Rotor Riot has no battery. Instead, it is powered by your iPhone via a wired connection. However, there's no need to worry. The controller uses very little power, even less than a pair of earphones. Moreover, there’s a handy charging port to allow you to charge your iOS device while you game on the go.

This is the latest Xbox controller that was introduced with the Xbox Series X and Series S consoles.

It has a similar design as the previous Xbox One controller but has a slightly smaller body. This makes it more comfortable to hold for people with smaller hands and just as easy to hold if you have larger hands as the previous versions.

Additionally, the plastic housing and triggers are textured, providing a much better grip. Especially if your hands are sweating. Microsoft also introduced a new "Share" button to make sharing of screenshots and recordings easier.

A very nice feature is also a 3.5 mm audio jack that you will find at the bottom of the controller. A convenient feature to enjoy a more immersive gaming experience in case your phone lacks an audio port.

You have two choices for batteries to use in your Xbox Wireless Controller: AA (LR6) batteries, and the rechargeable battery pack of the Xbox One Play & Charge Kit. The latter is recharged via a USB-C port found at the top of the controller. Note that the rechargeable battery pack is not included with the controller and needs to be purchased separately.

Xbox Wireless and Bluetooth technology are supported for wireless gaming on consoles, Windows 10 PCs, Android and iOS phones, and tablets.

Important: This phone DOES NOT include a phone mount. You will need to purchase one separately. Luckily, they are quite cheap and you can get one HERE.

I really recommend this controller in combination with an appropriate phone mount as it is one of the best controllers for League of Legends: Wild Rift.

Choosing the best controller for League of Legends: Wild Rift is not simple. There are many options on the market to choose from. Firstly you should think about how much you are willing to spend and what kind of design and button placement would fit you best.

If you stay within my list of recommended controllers for League of Legends: Wild Rift I am sure you will be more than satisfied. Wish you happy gaming ?.